Dancehall is named after Jamaican dance halls in which popular Jamaican recordings were played by local sound systems. They began in the late 1940s among people from the inner city of Kingston, who were not able to participate in dances uptown. Social and political changes in late-1970s Jamaica, including the change from the socialist government of Michael Manley (People’s National Party) to Edward Seaga (Jamaica Labour Party), were reflected in the shift away from the more internationally oriented roots reggaetowards a style geared more towards local consumption and in tune with the music that Jamaicans had experienced when sound systems performed live.[9] Themes of social injustice, repatriation and the Rastafari movement were overtaken by lyrics about dancing, violence and sexuality.

Musically, older rhythms from the late 1960s were recycled, with Sugar Minott credited as the originator of this trend when he voiced new lyrics over old Studio One rhythms between sessions at the studio, where he was working as a session musician.[9] Around the same time, producer Don Mais was reworking old rhythms at Channel One Studios, using the Roots Radics band.[9] The Roots Radics would go on to work with Henry “Junjo” Lawes on some of the key early dancehall recordings, including those that established Barrington Levy, Frankie Paul, and Junior Reid as major reggae stars.[9] Other singers to emerge in the early dancehall era as major stars included Don Carlos, Al Campbell, and Triston Palma, while more established names such as Gregory Isaacs and Bunny Wailer successfully adapted.

Sound systems such as Killimanjaro, Black Scorpio, Gemini Disco, Virgo Hi-Fi, Volcano Hi-Power and Aces International soon capitalized on the new sound and introduced a new wave of deejays.[4] The older toasters were overtaken by new stars such as Captain Sinbad, Ranking Joe, Clint Eastwood, Lone Ranger, Josey Wales, Charlie Chaplin, General Echo and Yellowman — a change reflected by the 1981 Junjo Lawes-produced album A Whole New Generation of DJs, although many went back to U-Roy for inspiration.[4][9] Deejay records became, for the first time, more important than records featuring singers.[4] Another trend was sound clash albums, featuring rival deejays /or sound systems competing head-to-head for the appreciation of a live audience, with underground sound clash cassettes often documenting the violence that came with such rivalries.[9]

Yellowman, one of the most successful early dancehall artists, became the first Jamaican deejay to be signed to a major American record label, and for a time enjoyed a level of popularity in Jamaica to rival Bob Marley‘s peak.[4][9] The early 1980s also saw the emergence of female deejays in dancehall music, such as Lady G, Lady Saw, and Sister Nancy. Other female dancehall stars include artistes like Diana King and in the late 1990s to the 2000s Ce’ Cile, Spice, Macka Diamond and more. [9][11]

About Ads on Our Blog

Ads displayed on our blog pages are undesirably placed by the site that hosts this blog and absolutely do NOT reflect the views or policies of Dance Brigade's Dance Mission Theater. We encourage all our readers to be conscientious with the media we choose to absorb. Free minds!

The Beat of 24th and Mission Archives 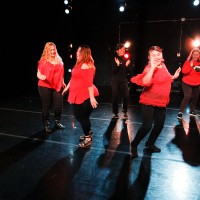 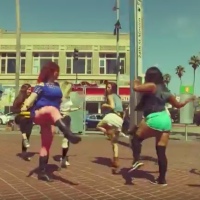